Vertex Fitness Owner Dwayne Wimmer is revolutionizing the Main Line fitness industry through science-based research and personalized programs for all.

In an ever-changing society of experimental programs and fitness fads, it’s easy to get wrapped up in what momentarily appears to be trending. However, some of these much-talked about fads designed for short-term rather than long-term health benefits can result in minimal improvement or worse—injury.  How do we find the ideal fit?

“No one should ever get hurt exercising,” says Dwayne Wimmer, owner of the widely-renown Main Line fitness studio, Vertex Fitness. “There’s too many people getting injured doing what they consider to be exercise, when it’s really only considered recreation or activity—or as I call it, ‘exertainment,’ which is entertainment disguised as exercise.”

This caliber of expertise possessed by Wimmer—in addition to his 30 years as a leader in the industry—is one of many distinct reasons Vertex Fitness has remained one of the area’s most successful fitness facilities. His success did not come overnight, however—rather, it developed over his 30 years attending conferences, clinics and seminars, educating himself on the science behind a healthy human body.

Wimmer also previously served a strength and conditioning coach at Villanova University, and eventually felt compelled to harness his passion for fitness and science into a state-of-the-art studio that would exhibit just that. Sixteen years later, Wimmer has not only transformed bodies into healthful and functional figures, but has also revolutionized the way people approach and think about fitness, by integrating scientific and evidence-based research into each personalized program to prevent an unwarranted injury. 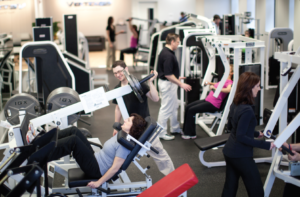 “I always go back to the science of the human body, and you have to understand that humans are more than same than they are different,” Wimmer explains. “The muscles are all in the same place and all perform the same function. There’s only two things that will really cause an injury—excess force and excess repetitions.”

Wimmer goes on to describe excess force as force one creates on themselves by trying to overcome resistance of a particular weight in a position not anatomically sound.

“If you start moving a weight really fast, or if you jerk it or drop it, that’s when you hurt yourself,” he notes. “What happens in some cases is injury resulting from trying to overcome resistance with momentum or using leverage from other parts of the body, which will put the body in a position that is not anatomically sound.”

“Secondly, if you do something repetitively over and over again, such as cycling or running, a lot of these things that people think of as great exercise, they end up getting their repetitive or overuse injuries,” Wimmer continues. “You don’t need to do so many repetitions if you use the proper resistance and enough intensity. A lot of research is being done with higher intensity and lower ration types—or high-intensity interval training—where you get less repetitive movements, and also are getting better results with less time.”

Wimmer and his team of certified personal trainers ensure all clients receive a workout that stresses the scientific aspect of overloading the body. A term that initially may induce some slight intimidation, the professionals behind the Vertex Fitness program assure clients it is anything but.

“Overloading your body in this sense means asking your body to do something it’s not doing on a regular basis,” Wimmer explains. “But what that also means is that your body will continue to adapt. There are those who don’t like this method because it is challenging. Because of our conservative and detailed approach, many people will not see those huge resistance changes right away, but what they don’t realize is through overloading the body safely, you’ll eventually get to a point where they’ll be able to do more repetitions and slowly move up in the weight they are lifting.” 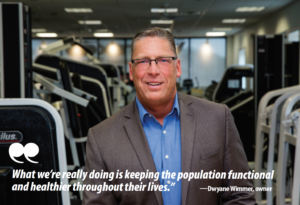 All trainers at Vertex Fitness abide by this science-based approach and are required to undergo a six-week training program created in-house by Wimmer himself, prior to becoming a certified trainer for Vertex Fitness. He says his unique program covers exercise protocol, in addition to the business and customer service aspects of Vertex.

“We also complete a whole section on success training in how to set personal and professional goals,” Wimmer adds. “We’re setting our trainers up for success, and providing them with life-long skills that they’ll take with them for the rest of their lives.”

Trainers are required to maintain a professional, controlled and safe workout environment to mimic the studio’s aesthetic, as well as to maintain client success and happiness. Wimmer prides his business being different from traditional gym settings, which he says are often polluted with excessive noise and rambunctious music. He differentiates Vertex as crisp, clean and client-focused.

“The Vertex Fitness environment is very controlled, with very light music playing in the background, and our studio has a clean and almost clinical feel,” he notes. “[Our clients] come in and know they’re here for business. They know they’re here to focus and get the most out of that time they’re spending in their session.”

First-timers at Vertex Fitness can expect not only a pleasant atmosphere, but a complimentary consultation and training session all within the same day. Within the consultation, clients can express personal goals, note any specific medical issues or recent injuries and will get an idea of what their fitness regimen will entail going forward.

“In the first session, the client will have already filled out a health history form and questionnaire, so we can sit down and go over anything that needs to be addressed and to make sure we design their program around those needs,” Wimmer states. “We then take them through a full-body workout during their complimentary session. Obviously on the first day we’re trying to take a slightly conservative approach because we’re not entirely sure of their full capabilities—but we want them to feel the beginning of the process and know what to expect later on.”

Vertex Fitness has stayed highly successful in both their client retention rates and success rates. WMMR host Steve Morrison is among one of several successful clients, who Wimmer says has been a longtime member of Vertex. These satisfaction rates can be attributed to Wimmer’s science-based program embodied into the heart of Vertex—and his team of zealous trainers 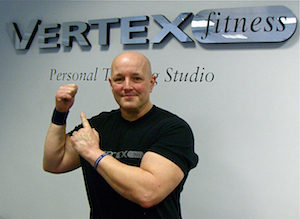 “When you’re on your own, you’re not always understanding what an anatomically sound position looks like, and your body and brain will revert back to trying to make work easier for you, which could compromise your position and make you more susceptible to injury,” Wimmer says.

“You can be putting forth a lot of effort, but also not putting enough stimuli on your muscles. We can get their whole body workout done in less than 30 minutes. What we’re ensuring is that the client’s time and effort is getting maximized to get the most out of what they’re putting into it.”

Above all else, Wimmer encourages those previously apprehensive or seeking a new routine to give Vertex—and his staff—a proverbial run for their money.

“What we’re really doing is keeping the population functional and healthier throughout their lives,” he concludes. “And because we’re backed by science, we’re implementing a program for everybody that is safe and will ultimately get them the results they’ve been looking for all along.”