The top of the thighs are made up of a pretty large muscle group known as the quadriceps, which are four muscles used to stabilize and extend the leg. Three of these (the Vastus Lateralis, Vastus Medialis and Vastus Intermedius) begin below the hip, on the femur and attach to the kneecap. The other, Rectus Femoris, overlaps the other three, crossing the hip and also attaching to the knee

The knee is the largest joint in the human body. It connects the Tibia and Fibula of the lower leg to the Femur of the upper leg allowing for flexion and extension of the leg. This makes it such an integral, structural component of the human body. 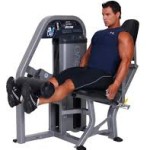 Let’s begin at the top. The Rectus Femoris attaches on the hip and plays a role in hip flexion (pulling the legs toward the abdomen) and knee extension. All of the Vastus muscles work to extend the leg to provide movement whenever standing up or running. The Vastus Lateralis is the largest lying on the outside of the thigh. The Vastus Intermedius inserts right above the knee and travels up the center of the leg, ending at the Rectus Femoris. The Vastus Medialis (VMO) is on the inside of the leg and is activated when the leg is fully lengthened.

Performing leg extensions to a certain degree in order to engage the entire group of muscles is not an easy task for everyone. Different things can affect the mobility of your knee such as tight hamstrings or a weak Vastus Medialis, but both can be improved.