The Leg Press is the exercise most responsible for the famed Vertex Shuffle. But despite its reputation, it is one of the most productive exercises in the studio.

The Leg Press is an exercise that works the muscles around the hip, knee and ankle joints. At the hip joint, the movement is hip extension done by the Gluteus Maximus and Hamstrings. At the knee joint, extension is accomplished by the Quadriceps. The calf muscles do flexion at the ankle. 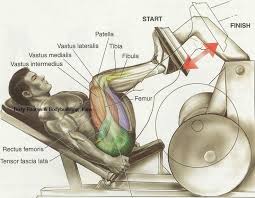 Because it is a multi-joint movement, you cannot isolate any of the aforementioned muscle groups, however, you can place more emphasis on a group depending on the positioning of the seat and back pad. A more upright back pad will place more emphasis on the quadriceps while a more laid back seat will get more hip extensor involvement.

The Leg Press was developed as a safer alternative to the barbell squat. The squat loads the resistance on the shoulders of the exerciser while the leg press loads the resistance on the feet.  In both exercises the force is produced by the same muscles through the feet.  But since the load is on the exercisers shoulders in the squat, the force that is produces has to travel from the hips through the feet then back up through the spine to overcome the resistance rather than just from the hips just through the feel. The leg press offers a way to target a large amount of muscle in a safer manner. That’s not to say that you can’t injure yourself on the leg press, you can. But on a properly set machine, using good form, and with the help of a qualified trainer, the chances of injury are dramatically lower.